Our modern world is awash with ideas. Some become the raw material of great technology achievements. Most don’t. The difference in fortune usually comes down to a pivotal moment along the way. For GSM it all came down to 37 weeks in 1987.

GSM can trace its origins as far back as 1975 when Henry Kieffer from the Swiss PTT suggested Europe needed to find new spectrum for mobile at 900 MHz – the vital raw material for radio.

Setting-up of GSM was the next significant milestone. Similar standards activity also started in USA and Japan. In those countries the standards responsibility for the radio and the linked network were split between different standards bodies. A similar split had existed inside CEPT. The critical decision in 1982 was to allow GSM to define everything it needed for itself. This secured a competitive edge for European mobile standards making.

Over the next few years GSM became a funnel for ideas from every R&D Lab in Europe. Great institutions like CNET, CSELT and BTRL, key Industrial Labs (Ericsson, Alcatel etc) and many Universities were all drawn into this exciting new opportunity – to digitalise Europe’s mobile networks. 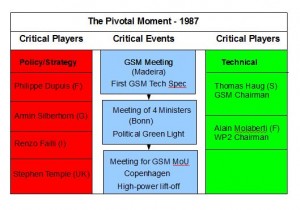 Over a very turbulent period in 1987 Europe produced the very first agreed GSM Technical Specification (February). Ministers from the 4 big EU countries cemented their political support  for GSM with the Bonn Minister’s Declaration (May) and the GSM MoU was tabled for signature (September). The MoU drew-in mobile operators from across Europe to pledge to invest in new GSM networks to an ambitious common date. It got GSM up and running fast.

In a breathtaking 37 weeks the whole of Europe (countries and industries) had been brought behind GSM in a rare unity and speed. 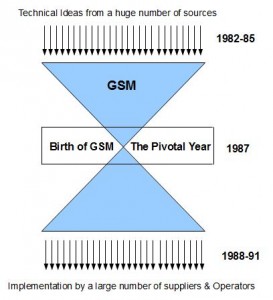 In this pivotal moment the guiding hands shaping the outcome of all three critical events were (from right to left) Armin Silberhorn Germany), Stephen Temple (UK), Philippe Dupuis (France) and Renzo Failli (Italy): 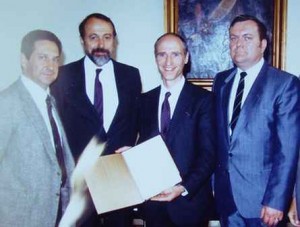 Thomas Haug (Winner of the 2013 Draper Prize for pioneering contributions to the world’s first cellular telephone networks, systems, and standards) facilitated a seamless criss-crossing of the initiative in and out of GSM.. 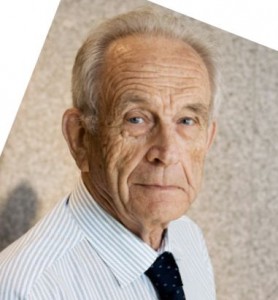 An important player in GSM’s success that has never received their deserved recognition is the EU Commission.

They made four significant contributions:

The standardisation task was immense. Keeping the radio technical details on the right track was led by the brilliant French engineer Alain Molaberti. 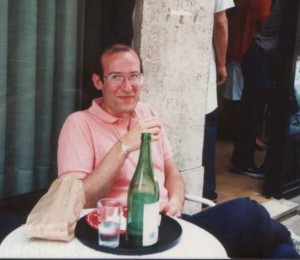 The very first GSM call was made by the Finnish Prime Minister (Harri Holkeri) in Helsinki to the Mayor of Tampere (Kaarina Suonio) who was in front of the Rosendahl Hotel in Tampere in Finland.

The future success of GSM then passed into the hands of hundreds of engineers from all the major mobile radio operators and the large systems companies. The result was a common cellular radio network right across Europe to serve the needs of the business community – an early triumph for the new European Single Market.

But the future destiny of GSM was not to stay rooted in the business market. Something happened that took it off this path and onto one that was to lead GSM to become the most successful communications network in history – with over 6 billion users. The mobile industry was to move out of its base of professional electronics and into a new world of consumer electronics. The point of origin for this transformation was the seminal publication by the UK DTI called Phones on the Move”.

The point of origin of mobiles becoming a mass consumer item

This was the first public consultation by any government to set out the new visions of Personal Communications as a consumer industry driven by widening the scope for network competition, opening up the 1800 MHz bands, adding 38 GHz microwave links to reduce the cost of back-haul and adding fresh energy to GSM’s scale economies. “Phone on the Move” was conceived and written by Stephen Temple who also proposed and wrote the GSM MoU.

Industry embraced the vision. The mobile revolution was born.

One of the reasons why GSM was so attractive to developing countries was that it was a complete telecommunications network. Standards bodies in other parts of the world only produced a specification for the radio piece of the mobile network. Automatic roaming and handover of calls between base stations required dedicated exchanges for numbering and switching management. GSM took the ideas developed for the NMT network and significantly extended them to support handover between exchanges and information security. A step forward was made in flexibility by using Signalling System No. 7 which was essential to support new data services and SMS. 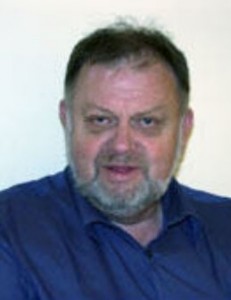 Jan Audestad who led the network side of the GSM standard

The Chairman of the GSM Working Party that quietly got on with putting all this together in a sensible architecture was was Norwegian Engineer Jan Audestad. Two other key contributors were Michel Mouly (France) and Christian Vernhes (France)

The other miracle of GSM was that the technical standard was ever completed on time. It was written in “the paper age”…over 5,000 pages of it. Feeding into this was probably 100 times that amount of paper by way of contributions to meetings. The contributors were dispersed right across Europe.

Bernard Mallinder from the UK headed up a full time support team under GSM to accelerate the work and in today’s world might have carried the title of Project Manager. 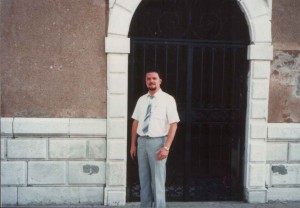 Thomas Beijer from Sweden was the Secretary of GSM and had to record a continuous flow of decisions taken by GSM that never met twice in the same place in its early days.

(Return to the Top)

SMS HAS BEEN DESCRIBED AS THE SLEEPING BEAUTY OF GSM. READ ABOUT THE 2+3 HEROES THAT BROUGHT ABOUT THE WORLD’S BIGGEST MESSAGING COMMUNITY: