With the precision of a swiss watch, no sooner has 5G just started to be rolled out in 2020 than the first conversations began on 6G. Many mobile operators were aghast at the thought of there ever being a 6G, as they struggled to convince their shareholders that the substantial 5G investments still to come were necessary. The battle over whether 5G should be the last of the “mobile generations” was short. The onward move towards 6G in the research community was unstoppable.  The first 6G visions began to emerge: 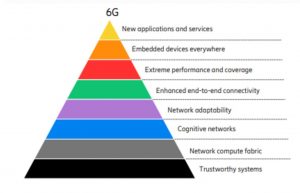 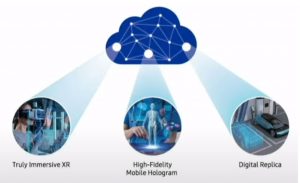 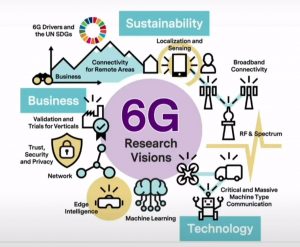 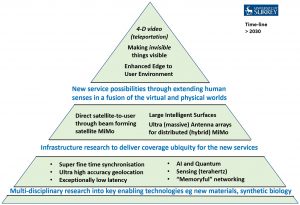 An emerging theme was new 6G services emerging from the fusion of the physical-virtual-biological worlds. Some have referred to this as “the Internet of Senses”. Satellites featured on the 6G landscape. The old staples of spectrum efficiency, security and energy efficiency were evident. AI was everywhere, with Huawei going into some detail. What was notable was less emphasis on setting up front key performance indicators for 6G, like leaps data speeds. The thought was that these performance targets should emerge later once there was a clearer picture of the demands from candidate new 6G service and where 5G appears likely to be a constraint on progress. There is far more prominence in these early 6G visions on 6G enabling new services to meet the big societal challenges ahead. These appear in several illustrations at the apex of a triangle or spear head. 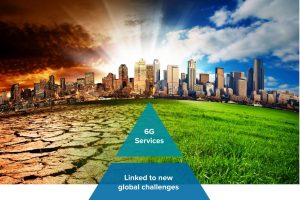 There is much to be said for this, as climate change, pandemic control and sustainable economic grown look set to radically change the way we all work, stay safe and play and that is likely to have a profound effect on our pattern of digital communications.