Shaping of the 4G Revolution

The origins of the Long Term Evolution (LTE) emanate from a statement of intent made at a Helsinki Workshop in 2001 that “the future” is Evolution and not Revolution. Indeed the Helsinki meeting was called a Future Evolution Workshop. The first three generation of mobile cellular technology had each been revolutions in their own way. Why this lack of revolutionary ambition? One reason is likely to have been the recession that had hit the European mobile industry in 2000 as a result the disastrous 3G spectrum auctions.   The mobile network operators had over-paid for their 3G spectrum and forced to cut back investment in the roll-out of the new 3G technology. That in turn really hit the supply industry badly. Their finances were in no state to take-on the huge investment in R&D that another revolution in cellular technology may have called for.

A lot can happen in a year. By the time of the second Future Evolution Workshop in New Orleans in December 2002 the self-confidence of the industry had returned. The Workshop was chaired by Mr Hiroshi Nakamura from NTT DoDoMo. His leadership encouraged a greater sense of ambition. Craig Bishop from Samsung suggested a split in time-lines between improvements that might be delivered in say 2006 and longer term areas that might come along in say 2012. Hashem Madadi from H3G suggested some examples of long-term evolutions and mentioned new and adaptive radio access techniques that might deliver data rates of up to 100 Mb/s. Paul Simmons from Nortel Networks wanted to see a greater decoupling between the end to end data transport and the service applications. The seeds were being sown for the 4G revolution. It was redressing what many (at the time) regarded as a short-coming of the 3G technology revolution. Release 99 of the 3G network had only delivered 384 kb/s peak data rate where many had been led to expect 2 Mb/s. It was time to set a much more ambitious goal that would require a revolution in channel widths. The 5 MHz channel width that 3G systems were required to work within was imposing too much of a constraint. A disruptive break-out into wider radio channel widths now had to be contemplated. Only then could the mobile industry really unleash the sort of access data rates over mobile broadband networks that the fixed broadband service seemed on track to eventually achieve.

If the seeds of the 4G revolution were sown in New Orleans in December 2002 it was the Radio Access Network Workshop held in Tokyo in 2005 under the chairmanship of Francois Courau where “the revolutionaries” turn-up in force. Nokia suggested that the long term evolutionary system should be able to operate at bandwidths up to 20 MHz. That created the possibilities of a brand new radio access system…a point not lost on Alcatel. They made a powerful contribution to the workshop by introducing OFDM in a major way into the LTE debate. The technology had been a contender for 3G but too many problems remained to be solved at the time. The Alcatel contribution argued that OFDM could offer a better guarantee of Quality of Service at the cell edge.  The names of Manfred Litzenburger and Christian Gerlach appear on the Alcatel contributions. 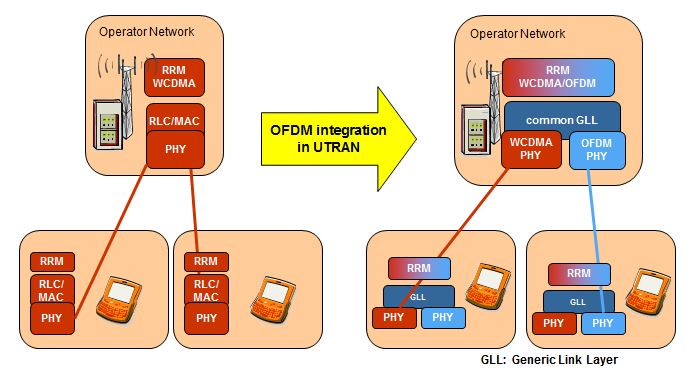 There are two other technical characteristics that people tend to associate specifically with 4G. The first is the huge flexibility in resource management that is put into the hands of the mobile network operators. That seems to have evolved over the course of many meetings rather than coming as a “big bang”. The second is the deployment of MiMo antenna systems. In 3GPP standardizations, MIMO techniques had been actively discussed and various categorized schemes appeared in a number of contributions to 3FPP around the 2003 period.  At some stage 2×2 MiMo became attached in many peoples’ minds to 4G performance that could deliver 150 Mb/s peak.

The emergence of a common 4G technology across the world is the result of an evolution of cooperation that grew out of GSM, went global (thus attracting the best ideas from every corner of the industrialised world) and drawing on the strength of the Mobile Competence Centre based at ETSI. It is an undoubted triumph for the 3G Project Partnership.

This is a preliminary account based on research of public documents and my thanks to Adrian Scrase, Head of the Mobile Competence Centre,  for pointing me towards the key documents. Comments and suggestions for improvements are welcome.  I would particularly like to publish a final version shaped by those involved. Go to the Contacts which will take directly to my e-mail in-box

http://www.3gpp.org/DynaReport/21902.htm gives the development of the earliest Technical Report of the ad hoc “Evolutionary Group”

http://www.3gpp.org/ftp/tsg_sa/TSG_SA/AD-HOCs/  has the document folders of all the ad hoc Evolutionary Group meetings

http://www.3gpp.org/ftp/tsg_ran/WGs_LongTermEvolution/ sets out the story of how the radio access standard evolved